John Weidner and the Dutch-Paris

Yesterday I wrote about two early instances when Seventh-day Adventists acted as a peculiar people, daring to resist national statutes and norms in order to live their radical faith. Adventists were to disregard the Fugitive Slave Act, and even though their moral support was with the North in the Civil War, they were not to enter the war. 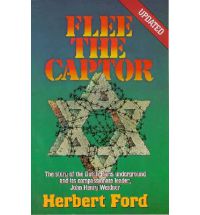 A somewhat more modern example of this same attitude and approach is that of John Weidner (Jean/Johan Hendrik Weidner Jr). His story is told in the book, Flee the Captor (Herbert Ford, 1979). You can also learn about him at The Weidner Foundation, the U.S. Holocaust Museum, and, of course, Wikipedia.

John helped organize the Dutch-Paris, an underground network of people who collaborated to move people to safety during WWII.

The Dutch-Paris Escape Line ran from the Netherlands through Belgium and France and into both Switzerland and Spain.  It rescued approximately one thousand people, about 800 of whom were civilians, the majority of whom were Jewish families.  Dutch-Paris hid and supported some of those people in Belgium and France and took others across the border into neutral Switzerland.  The rest were allied airmen, Engelandvaarders or people required by the Dutch government-in-exile in London, who walked over the Pyrenees Mountains and through Spain to reach England.

Dutch-Paris also acted as a messenger service for the Dutch government-in-exile in London by smuggling microfilms hidden in fountain pens and such like along the same route. (Dutch-Paris Blog)

The Dutch-Paris Escape Line was the only transnational escape line operating during World War II.  The line involved 300 families in Holland, Belgium and France who opened their homes to those fleeing the Nazi occupation.  In all, over 1080 Allied aviators, Jewish refugees and political figures used the line to make their way to either Spain or Switzerland.

The line functioned in two directions.  From Holland, the line ran south as it transported and sheltered those wanted by the Nazis.  It also delivered messages from the Dutch underground to the Dutch government in exile in England.  In return, the Dutch government in exile sent information back through the line to the Dutch underground.  Going south, the line was called Dutch-Paris.  Going north, it was known as “The Swiss Way”. (The Weidner Foundation Archives)

The documentary, Way to Freedom, which can be viewed in its entirety on YouTube, tells some of the stories of Dutch-Paris (1967, English subtitles, 44 minutes). This film is “about the Dutch-Paris line that helped over a thousand (mainly Jewish) refugees escape out of occupied territory during the Second World War. It features interviews with its leader, Jean (John) Weidner, and several of his associates like Herman Laatsman, Moen Chait, Paul Veerman and Dr. W.A. Visser ‘t Hooft.” The film also speaks about John’s sister, Gabrielle Weidner.

Near the end of Way to Freedom, Weidner explains why he risked his life to lead this network.

Filmmaker: What exactly was it that made you do this work?

Weidner: There are many reasons. I thought, as a Christian who logically wanted to follow my principle of love for people who were endangered, it was my duty to save people. That is a very normal duty for a logical Christian. As you know, I belong to the Seventh-day Adventists. And there I have always learned that I have to show my love by deeds. And that I had to help these people who were in need. So it is my country as well as my love for my fellow man that forced me there. And the Nazi ideology was so terrible, so anti-Christian that I had to do something.

NOTE: Thank you, Keith Paulusse, for bringing this documentary to my attention.

4 Responses to John Weidner and the Dutch-Paris